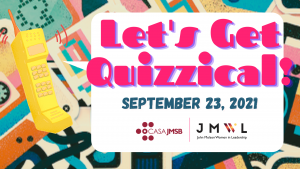 Join us via Zoom on Thursday September 23rd at 5:00pm (EDT) for a fun virtual trivia night centered around women history!

This event is perfect if you want to get to know JWML and what we stand for! Get ready to test your knowledge around women history in different industries whether it’s in sports, cinema, business and so on! Did we also forget to mention that the winner gets a prize?

I really enjoyed JMWL’s first event of the year! The virtual trivia night centered on women’s history was both entertaining and educational. Covering a variety of topics ranging from politics to science, attendees certainly walked away with an enlightening fact to share with their family and friends – I know I did! Further, the JMWL team did an amazing job at creating a welcoming atmosphere for its audience. I am definitely looking forward to future events.

First off, I think it was great that the team decided to showcase so many women in history with impressive accolades in various industries such as sports, science, and entertainment! I liked that Ashley and Katie consistently tried to keep the audience involved by asking them questions. Something that I think could have been improved on was integrating JMWL’s message into a few of the questions. For example, it was stated at the beginning that JMWL’s message encompasses “the three E’s” (engage, educate, empower). This is an example of something that could have been made into a Kahoot question to spread the committee’s message is a fun and memorable way. I also found that although the committee’s members did seem super kind to attendees, they also seemed a little shy! But overall, this event was a fun, lighthearted gathering with a very welcoming group of people (the JMWL executive team) and provides a good basis for the rest of the school year!

Everything about the event was great. The trivia questions were so intriguing, the hosts were
well coordinated, and the audience were highly engaged. The slides were user friendly and allowed the audience to learn fun facts in different sectors. Overall, I had a great time. Despite, it being a virtual event, it was a lot of fun! I also learned a lot from the event. It was a pleasure to capture such an inspiring and awesome event! I have never been more proud being a women

Negotiate to Level Up – Testimonies 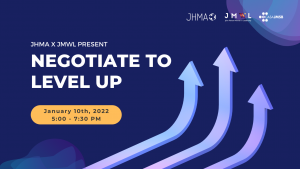 Do you need advice on how to negotiate your salary? 💵
Are you graduating soon or looking for an internship and don’t know what an appropriate salary is when starting a new job? 👨‍🎓🔍

Start the year 2022 strong with full knowledge on how to negotiate your salary. Come learn about what to keep in mind while negotiating, how to communicate in the office & more! 🧠

This event was extremely informative for any undergraduate student or recent grad who was looking for more information on the topic of job negotiations, which can often be daunting – even for those who have prior experience negotiating their salary! I appreciated the Q&A portions of the event where attendees were able to ask specific questions on salary and compensation to the guest speakers, Bob and Liz. Both speakers provided honest and insightful advice with multiple example scenarios that job-
seeking graduates, or students looking for their next internship, can apply in future job negotiations.

As a soon-to-be graduating student from Concordia University, I am very grateful that I attended JMWL and JHMA’s seminar on salary negotiation. The guest speakers, Liz Bouthillier and Bob Menard, delivered a thorough rundown on the essentials of salary negotiation and offered clear and concise advice for students. Overall, it was an interactive and fun event and a great chance to network with professionals and peers. The valuable knowledge that I have gained from attending this seminar has made me feel even more prepared as I get ready to enter the job market!

It was great to hear about negotiating skills and know I’m not alone in making a few mistakes! I feel much more confident about avoiding errors in my future interviews thanks to the advice given by guest speakers Liz Bouthilier and Bob Menard. I loved the quote given by Liz Bouthilier about confidence. She said: “Confidence isn’t about self-esteem. It is the ability to move forward with action not knowing whether that action will succeed or not. Feeling the fear and doing it anyway.” Moreover, I liked how the audience was engaged and asked so many interesting questions. Thank you for organizing a great virtual event. I appreciate all efforts made by JMWL and JHMA in making this a huge success. Looking forward to the next event! 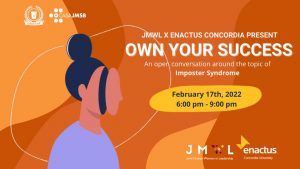 Join us on Thursday, February 17th for a FREE event of JMWL x Enactus Concordia!

WHAT? A panel session on the topic of imposter syndrome, a workshop on entrepreneurship AND a networking session!

This event will include a panel session centered around the topic of Imposter Syndrome followed by a networking session.

It will also include a workshop offered by Front Row Ventures on the topic of entrepreneurship.

JMWL and Enactus’ “Own Your Success” event was a great learning experience for me. The event started out with a presentation from Front Row Ventures, which was interesting. However, the part that I enjoyed the most was the panel discussion between the three business professionals: Benedicte Guerin, Archontia Tsiampali, and Judith St-Pierre, during the second half of the event on imposter syndrome. To hear the experiences of three women who have experienced imposter syndrome was very reassuring to me as a woman pursuing a career in business. The discussion was very candid, and they provided helpful and inspirational advice, which I hope to heed in the future!

“Own your success” event was a huge and great success. I felt like I was listening to a podcast. We all learned a lot from great guest speakers. The workshop offered by Front Row Ventures on the topic of entrepreneurship was truly informative. It was great to spend the evening with such inspiring people. The panel session was incredibly engaging. Thank you to Judith St-Pierre, Benedicte and Archontia Tsiampali for all the amazing insights shared during the session and for all the videos, podcasts, and books recommendations! The session was very insightful and inspiring! Definitely looking forward to the next.

I think all business students should attend an event like this at least once during their degree. As a business student, I feel it’s common for us to believe that we aren’t qualified for our next big opportunity and that we must always “do more” or “be better” to truly own our qualifications. That’s why I really enjoyed the “own your success” theme of this event. To see the panel of guest speakers, who were all established business professionals, be super candid about their experiences with imposter syndrome and how they dealt with this struggle were really reassuring and inspiring 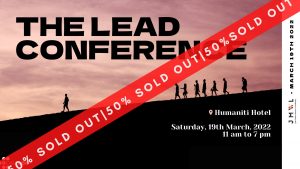 Are you looking to expand your network and make new connections in your field? Want to learn more about your major?
If you answered YES to either questions, you’re in luck!

JMWL is happy to host our in-person flagship event “The LEAD Conference” this March 19th, from 11AM-7PM!

Get ready to network with top companies and mentors while learning about different issues surrounding the monopolization of leadership positions through their success stories.

JMWL did not disappoint with the LEAD conference! This event intended to help students learn more about leadership and navigating their careers, and it did just that through panel sessions with guest speakers, the mentorship lunch, and a networking cocktail. It was a great opportunity for students to connect with industry professionals as well as their peers. Many attendees that I spoke with at the end of the conference said they were left feeling inspired by the discussions that took place throughout the day. I’m definitely looking forward to next year!

I had to take a moment to thank you for an incredible event! I really enjoyed meeting such inspiring people. The event was extremely well organized, and it sparked a lot of interesting discussions. I liked what the mentor Myra Kennedy said, “Find the beauty in the unknown.” “Don’t be afraid to make mistakes and trust the process”. There can be no doubt that the event was a huge success with highly positive feedback from the participants. It was great to see people making inter-university connections. Looking forward to the next one!

JMWL’s committee worked very hard and did an absolutely amazing job organizing and putting together the LEAD Conference. The venue was very beautiful and they were able to secure some great panellists and mentors from a variety of companies who provided great advice to attendees. Overall, it was one of the best events that I have attended during my time here at JMSB!